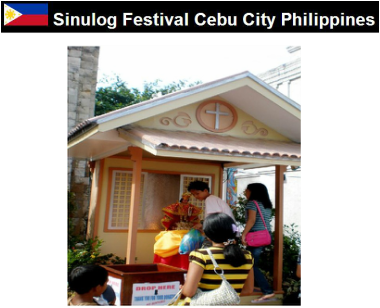 "The Sinulog festival is one of the grandest, most distinguished and most colorful festivals in the Philippines. The major festival is held each year on the third Sunday of January in Cebu City to honor the Santo Niño, or the child Jesus, who used to be the patron saint of the whole province of Cebu (since in the Catholic faith Jesus is not a saint, but God). It is fundamentally a dance ritual which remembers the Filipino people's pagan past and their recognition of Christianity.
The festival features some the country's most colorful displays of ceremony and pageantry: participants clothe in bright-colored costumes dance to the rhythm of drums and native gongs. The streets are generally lined with vendors and pedestrians all wanting to witness the street-dancing. Smaller versions of the festival are also held in different parts of the province, also to celebrate and honor the Santo Niño. There is also a Sinulog sa Kabataan, which is performed by the youths of Cebu a week before the Grand Parade.
Recently, the cultural event has been commercialized as a tourist attraction and instead of traditional street-dancing from locals, Sinulog also came to mean a contest highlighting groups from various parts of the country. The Sinulog Contest is traditionally held in the Cebu City Sports Complex, where most of Cebu's major provincial events are held.

The Festival
The celebration traditionally lasts for nine days, ending on the ninth day when the Sinulog Grand Parade reveals. The day before the parade, the Fluvial Procession, a water-parade, held at dawn from the Mandaue City wharf to Cebu City wharf with the Santo Niño carried on a pump boat decorated with hundreds of flowers and candles. The procession ends at the Basilica where a re-enactment of the Christianizing of Cebu follows. In the afternoon, a more formal procession takes place along the major streets of the city, which last for hours due to large crowd participating in the religious event.
On the feast day, at the Basilica, a Pontifical Mass is held, given by the Cardinal with the assistance of several bishops of Cebu. The majority of the city’s population and devotees would flock to the Basilica to attend the mass before heading out to the streets to watch the Parade.

Background
'Sinulog' comes from the Cebuano adverb sulog which is "like water current movement," which proficiently describes the forward-backward movement of the Sinulog dance. Traditionally, the dance consists of two steps forward and one step backward, done to the sound of the drums. The dance is classified into Sinulog-base, Free-Interpretation, and recently a Latin Category, which most people have argued that it had nothing to do with Sinulog tradition. Candle vendors at the Basilica continue to perform the traditional version of the dance when lighting a candle for the customer, usually accompanied by songs in the native language."